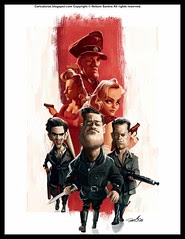 Inglorious_Basterds_poster_illustration [Copyright Nelson Santos]
Originally uploaded by caricaturas
Inglourious Basterds poster illustration featuring the amazing characters from Quentin Tarantino´s movie, the opening scene is just thrilling with a great interpretation of Cristoph Waltz as Col. Hans Landa. After Jackie Brown this must be Tarantinos best movie and you can see also some influences on Enio Morricone soundtrack and the spaghetti western like Once Upon a Time in the West. The story of the movie is In Nazi-occupied France during World War II, a group of Jewish-American soldiers known as "The Basterds" lead by Lt. Aldo Raine are chosen specifically to spread fear throughout the Third Reich by scalping and brutally killing Nazis. If you have read this and found it intriguing storu then go watch the movie and prepare for a good time in front of your screen. I give it 5/5 stars.
Publicada por Nelson Santos à(s) 12:04 da tarde